Measuring the Effects of Interferon Stimulated Genes on Viral Replication

Whenever I read a paper that describes an experimental technique that I’m not familiar with (which is often, since the lab bench is not where bioinformatic students spend most their time), I compensate by doing background research. Lately, I have been reading a lot about the antiviral effects of interferon-stimulated genes (ISGs), and since John Schoggins is giving a seminar in my university on Monday, I thought I would post about a clever technique that he used in his Nature paper to quantify the impact of ISGs on viral replication.

Interferon-stimulated genes are known to inhibit viral replication, but this effect hasn’t been quantified for all of them. The goal of the Schoggins paper was to determine how individual ISGs change the ability of different viruses to replicate.

The authors used a bicistronic lentiviral vector, which is molecular biology jargon for a piece of DNA that contains two genes that get inserted into the genome of a cell by using a lentivirus virion. They are also known as plasmids or constructs. Besides the two genes, the foreign DNA also contains a bunch of other interesting molecular tools assembled in Frankenstein-like fashion:

The viruses used in the experiment were modified so they would express GFP (green fluorescent protein). That way, the amount of viral replication can be quantified by measuring the amount of red fluorescence (from cells that incorporated the plasmid) and green fluorescence (from cells that were also infected with the virus). Each ISG construct has a specific ability to reduce viral replication. Surprisingly, a number of ISGs actually enhance viral replication (the circles that are above 100% in the graph below), although the reasons for this are not yet clear. 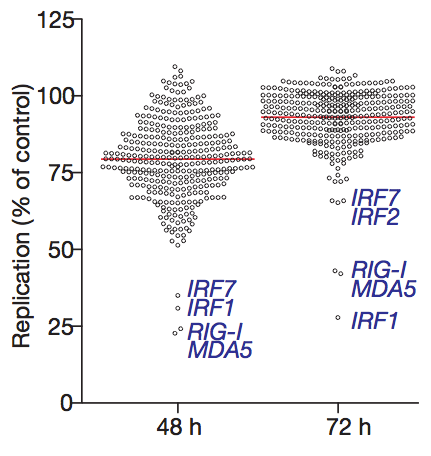 Clever molecular techniques like this one are the best tool that we have to understand what is really going on inside our cells. By studying them, I hope to learn enough to eventually design my own useful experiments.